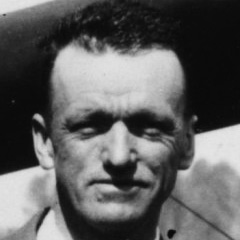 Walter T. Varney has been selected for his role in the development of commercial air mail service to Nevada.

In 1918, the first scheduled airmail flight took off from Washington, D.C. to New York. The plane was piloted by a young Army Air Service pilot who promptly got lost and flipped the aircraft during landing. Airmail routes were expanded over time with the completion of transcontinental service in September 1920. This route went from Elko and Reno, Nevada to San Francisco. Feeder routes eventually provided connections to transcontinental service points, so that communities that were not on the transcontinental route could also have air mail service.

Walter T. Varney was born on December 26, 1888 in San Francisco, California. After graduating from high school, he attended the Redwood School of Aviation on the Peninsula. With America’s entry into World War I, Varney enlisted and was sent to the University of California’s School of Military Aeronautics. Upon completion of the training in 1918, he was assigned to March Field near Riverside, California.

When released from the service, Varney talked his father into buying him an old Jenny airplane, so that he could start a flying school. In 1919, Varney purchased the Lynch Field in Redwood City, California, where he set up his business. He gave flying lessons, distributed locally grown flowers, and offered aerial taxi service throughout the bay area. However, business was not very profitable. Therefore, when “the first barnstorming ship of the air” landed at his field later in 1919, Varney recognized another financial opportunity.

In May 1920, Varney was one of the featured pilots in an aerial circus that performed at an event in Oakland, California. He also appeared at Modesto’s Golden Jubilee and Armistice Day Celebration in November 1920 where he flew his new Hispano Suiza with a 220 horse power engine. Varney used this aircraft to set the Pacific Coast altitude record and for stunt flying.

By November 1921, Varney was exploring the possibility of creating a branch of his aviation school at Anderson Field in Las Vegas. Bob Hausler was appointed as a local agent for the Walter T. Varney Airplane Co. and School of Flying. Their first advertisement appeared in the Las Vegas Age newspaper on November 12, 1921. However, the Las Vegas market didn’t pan out and their last advertisement appeared on April 4, 1922. In October 1922, he also closed his Air Express Line serving San Francisco and Modesto due to a lack of business.

In 1925, Congress passed the Contract Air Mail Act, establishing air mail routes which were open for private operators to bid on. Varney picked one which he knew that other potential bidders were not interested in. In October of that year, he landed the contract to carry mails from Pasco, Washington to Elko, Nevada. In 1926, he founded Varney Air Lines based in Boise, Idaho. On April 26, 1926, the first commercial air mail flight in the United States took off from Boise to Elko.

In August 1926, San Francisco was looking at the land next to the Varney Air Field to use as a new air terminus, but eventually selected land further north. In the fall of 1926, Varney “retired” from the Varney Airport and turned it over to the former manager, allowing himself to concentrate all of his efforts on the new mail service. United Aircraft bought Varney Air Lines for $2 million in 1930. In 1933 the company was renamed as United Airlines.

By 1932, Varney had established his new company, Varney Speed Lanes, flying Lockheed Orions between Los Angeles and San Francisco. When Lockheed went into bankruptcy later in that year, Varney and two partners acquired the assets for $40,000. They reorganized the company and relocated the headquarters in Burbank, California. Varney owned 50% of the stock when the company was acquired, but disposed of it in May 1933.

Varney changed the name of his Speed Lanes to Varney Speed Lines in 1934 and began passenger service from Pueblo, Colorado to El Paso, Texas. He also established Lineas Aereas Occidentales, providing service from Mexico City to Los Angeles. However, by 1937, Varney was out of the business that carried his name. On July 1, 1937, the new head of the company changed its name to Continental Airlines. (In 2010, Continental merged with the same United Airlines, which bought Varney Air Lines, and became United Continental Holdings.)

With the advent of World War II, Varney tried to re-enlist in the Army Air Corps, but was turned down because of his age. He worked for Lockheed as a test pilot throughout the war and eventually retired from that company in 1951. Varney died in Santa Barbara, California on December 26, 1967, his 79th birthday.