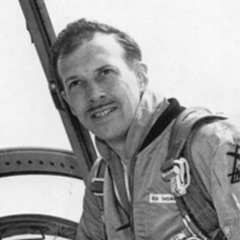 Richard Thomas has been inducted for his role in the successful demonstration of a curved surface approach to low radar cross-section aircraft design.

Richard G. "Dick" Thomas, born April 2, 1930, in Chautauqua, N.Y., first flew in an open cockpit Stearman biplane at Parks College, St. Louis University, where he received a Bachelor of Science degree in Aeronautical Engineering in 1952. A graduate of the Reserve Officer Training Corps program he was commissioned a second lieutenant in the U.S. Air Force that same year. He earned his wings in 1952 when he completed primary flight training in the T-6 at Marana Air Base, AZ. In 1953 he completed basic flight training at James Connally Air Force Base at Waco, TX. After transitioning to jets in the T-33, he flew the F-80C and was sent to Tyndale AFB, Panama City, FL, for F-86D All Weather Fighters. In Oct, 1953 he was assigned to the 456th Fighter Interceptor Squadron at McCord AFB, WA to fly F-86's where he completed his service in 1956.

He left the regular Air Force for a flight test job with Beech Aircraft in Wichita, KS where he conducted production flight testing of nearly all Beechcraft products including the Model 18, Model 35 Bonanza, Model 50, and King Air. He also joined the Kansas Air National Guard as a member of the 127th Fighter Interceptor Squadron and flew the T-33 and the F-86D until 1961.
In 1958, he went to work for Boeing and in January, 1959, started flying chase in T-33's, F-86's, F-100's and F-101's for the B-47 and B-52 test programs. That same year Boeing assigned him to fly the ERB-47 and B-52H & G. He conducted flutter tests in the B-52H with Skybolt missiles attached to wing pylons, and helped develop a maximum separation maneuver for the release of nuclear weapons from an altitude of 55,000 feet. In 1962, the company sent him to U.S. Navy Test Pilot School where he graduated as a member of Class 31.

Thomas left Boeing for Northrop in 1963 and served as test pilot for the T-38 and all models of the F-5. During 107 spin tests he developed ways to recover from end-over-end tumbles. His hazardous high-angle-of-attack stall and spin testing in the F-5 established procedures now followed by fighter pilots around the world. He also flew the X-21 laminar flow control testbed aircraft.

In 1977 and 1978, Thomas spent time in Madrid, Spain, helping the Spanish Air Force flight test the CASA C-101 trainer aircraft. He carried out a complete stability and control and spin-testing program despite the fact that the airplane lacked a spin recovery chute. Then in 1981, the USAF Tactical Air Command had Thomas evaluate their Red Flag Aggressor Training Program at Nellis Air Force Base to identify ways to reduce departure/spin accidents associated with the program.

As Northrop’s Deputy Site Manager for Operations at Groom Lake, NV and Project Test Pilot, Thomas led the flight-testing of TACIT BLUE, a one-of-a-kind demonstrator. He flew the first four flights of TACIT BLUE, the first on February 5, 1982, and went on to pilot 70 of the airplane's 135 flights. According to the U.S. Air Force, TACIT BLUE was one of the most successful high-technology demonstrator programs ever conducted. It had a direct influence on the design of the B-2 stealth bomber including development of the flight control system, low observables shaping and materials, propulsion installation, and electronic systems. Carried out in total secrecy, the TACIT BLUE program was not declassified until 1996 when the airplane was publicly unveiled at the U.S. Air Force Museum (now National Museum of the U.S. Air Force) at Wright-Patterson Air Force Base, Ohio.

Thomas stopped flying in 1986 but continued his career with Northrop Grumman as Technical Director on the B-2 program developing flying techniques in the simulator prior to the maiden flight. He retired from Northrop Grumman in 2000. During his career he logged 8,000 hours flying more than 116 different aircraft. He passed away June 19, 2006.