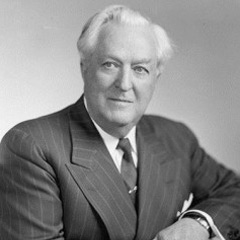 Senator Patrick A. McCarran was chosen for his leadership in the creation of an independent national aviation authority, advocacy of a separate air force, and development of civilian and military airfields across the United States.

In the 1920s, aviators frequently built their planes based upon an idea or purchased surplus military aircraft. Airfields were a little more than bladed dirt strips or grass fields dotted across the countryside. Commercial passenger service began when a person was willing to pay for the privilege of sharing space with several mailbags in order to reach their destination sooner. Aviation leaders recognized that commercial service couldn’t reach its full potential without Federal action to regulate and improve the industry.

Patrick A. McCarran was born on August 8, 1876 in Reno, Nevada. When he was ten years old, his family moved to a sheep ranch on the Truckee River, approximately fourteen miles east of Reno. Because the family had no way of getting young McCarran to and from school, he did not begin grade school until he was able to ride a horse to and from school each day at the age of ten.

After graduating from high school in 1897, McCarran entered the University of Nevada. But he was forced to drop out during his last semester to work at the ranch when his father was recovery from an injury. In 1903, he served in the state legislature. He never returned to the university but spent his spare time studying law. In 1905, he passed the Nevada bar exam and was admitted to the state bar. McCarran moved to the boomtown of Tonopah, Nevada to practice law both in Tonopah and nearby Goldfield. Between 1907 and 1909, he served as the Nye County district attorney.

After two unsuccessful attempts at national office in 1916 and 1926, McCarran was elected to the United States Senate in 1932. As a freshman in the Senate, he was appointed to the Appropriations and Judiciary Committees. In the following year, Senator McCarran sponsored a bill to create an air force separate from the army. Although the bill failed to pass, he remained interested in aviation throughout his Senate career.

McCarran was reelected in 1938, and sponsored aviation related legislations including the Civil Aeronautics Act (CAA) of 1938 and Civilian Pilot Training Act of 1939. The CAA created the Civil Aeronautics Authority, the predecessor to the Federal Aviation Administration. More than any other federal aviation legislation enacted during this period, the CAA shaped the passenger aviation industry as we know today. It gave the federal government authority to regulate airline fares as well as to determine routes that air carriers would serve. The act also expanded the role of the government in the areas of airway development, aircraft safety, and accident investigation. Crucial to the nation’s defense, the Civilian Pilot Training Act directly led to the training of thousands of pilots during the early years of World War II.

In 1940, Senator McCarran was instrumental in the appropriation of federal funds for construction of military and civilian airports throughout the United States, including the Las Vegas Army Airfield. This field was dedicated to and named after Senator McCarran in 1941. While the field was closed at the end of World War II, it was reactivated two years later as Nellis Air Force Base. He was also responsible for the locating war industries to what later became Henderson, Nevada. These operations eventually included plants involved in the production of manganese (used in the production of steel and batteries) and titanium (used in the production of aircraft parts).

McCarran was reelected to the Senate in 1944 and 1950. He sponsored the Federal Airport Act of 1945, which helped funding for a new airport to serve Las Vegas passengers. In recognition for his contributions, on December 19, 1948, the new airport was named as McCarran Field.

Senator McCarran served on numerous committees throughout his career. During his fourth term in the Senate, he died on September 28, 1954, at the age of 78. In 1960, the State of Nevada donated a bronze statue of Senator McCarran to the National Statuary Hall at the United States Capitol, where it is on display today.